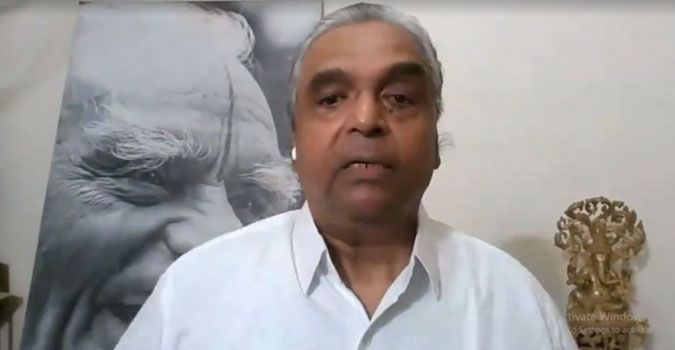 Prashant S Iyengar heads the Ramamani Iyengar Memorial Yoga Institute, Pune which had won the first Prime Minister's Award for Outstanding Contribution for promotion and Development of Yoga in 2017. Son of renowned Padma Vibhushan Yogacharya B. K. S. Iyengar, he was exposed to yoga from early childhood and took to Yoga in his teens in the late 1960s. He is an erudite scholar of yogic texts and adhyatmik scriptures. He is a prolific author and has many titles to his name. His command over language and lexical skills makes him an effective communicator. Firmly grounded in the scriptures, he brings a fresh perspective to the philosophy of yoga based on personal experiences from his yoga practice. As a yoga teacher he is able to weave the practical aspects with the philosophy of yogic texts so that his students can assuredly experience the yogic states. He does not believe he is tasked to popularise yoga and all his time and efforts are directed towards education in the subject of yoga and through explorations in asana and pranayama. He rarely travels out of Pune. He is also a virtuoso violinist and the maestro Lord Yehudi Menuhin was so impressed with his presentation that he presented him a replica of his Stradivarius violin.